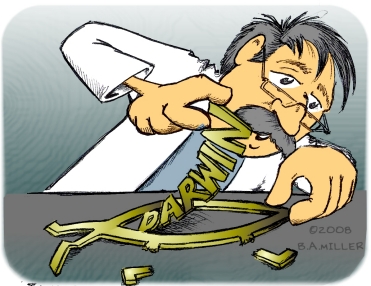 Darwinists and those who philosophically stand with them considered themselves to be the wisest and most intelligent beings in the entire universe.

THE DARWIN FISH WAS DESIGNED

The first thing you should notice about the Darwin fish, is that it is the product of intelligent, though misguided, design. The legs on the Darwin fish didn’t evolve any more than the legs evolved from fins on fish in the distant past. Legs, real or symbolic are the product of intelligence. Darwinists don’t want this to be true, so they fail to recognize or willingly reject evidence that supports intelligent design rather than evolution.


The Bible has several things to say about the people who reject the idea of the creator. The Darwin fish and the beliefs of Darwinists fit the Biblical descriptions exactly.

For the wrath of God is revealed from heaven against all ungodliness and unrighteousness of men, who hold the truth in unrighteousness;  Because that which may be known of God is manifest in them; for God hath showed it to them.  For the invisible things of him from the creation of the world are clearly seen, being understood by the things that are made, even his eternal power and Godhead; so that they are without excuse: Because that, when they knew God, they glorified him not as God, neither were thankful; but became vain in their imaginations, and their foolish heart was darkened. Professing themselves to be wise, they became fools, And changed the glory of the uncorruptible God into an image made like to corruptible man, and to birds, and four-footed beasts, and creeping things.

One concept to keep in mind is that Darwinists tend to believe that God is no more than a two dimensional story book character. Which means they feel free to assign attributes to Him. They do this in order to make Him look illogical or irrelevant, without consideration to what the Bible actually says.

Darwinists are the first to point out what they think of the God of the Bible, full of wrath, angry. One atheist t-shirt reads “God is angry every day, maybe he’s angry at you.” This is of course taking a Bible verse out of context. The King James adds the words “with the wicked” to help people understand the obvious. Without even knowing the exact statistics, I know that someone is doing something criminal, malicious, hurtful or evil at any given moment. Is it wrong for God to be angry at these things? If not, then God would be angry every day. This is a problem for a two dimensional character, but not for an omnipresent, omniscient being.  But are they interested in understanding God’s character, or just complaining?  Liking, disliking, understanding or misunderstanding what the Bible says about God has no impact on whether he is there or not, or on his true character.

If you look through the Bible you can find all sorts of terrible things that are connected directly with God. He sends plagues, killing angels, disasters, starvation and many other things. Personally, if I thought that was all there is to God, I wouldn’t want to believe in him either. But that is not what God is like. This viewpoint is very narrow and self serving.  It’s a viewpoint taken by people who don’t want God in their lives and want to find a way to justify their position.

The Bible clearly states that this wrath is directed at ungodliness and unrighteousness and towards those who hold back the truth in their unrighteousness, not to everyone. Since Darwinists reject God’s Word they believe that it is good to prevent people from believing it. Therefore rejecting God’s word is a moral act in their eyes. They hold back the truth in unrighteousness. Darwinism is an attack on the God of the Bible, their slogans, music, literature all focus on the God they reject, even the modified fish symbol they proudly display. How many anti-Hindu, anti-Islam slogans are the Darwinists displaying.

2. Because that which may be known of God is manifest in them; for God hath showed it to them. For the invisible things of him from the creation of the world are clearly seen, being understood by the things that are made, even his eternal power and Godhead; so that they are without excuse:

God’s creation, and especially man, is evidence for the existence of God. Even before molecular biology it was clear to many people that the design of life was evidence of God. Darwin unwittingly used scientific ignorance to his advantage when he introduced his theory of natural selection and variation. But now, with the advancements in science there is no excuse not to recognize the need for an intelligent designer and understand how powerful God must be to have created life and this universe. Darwinists reject the evidence and insist that they can see evolution, so they are without excuse.

3. Because that, when they knew God, they glorified him not as God, neither were thankful; but became vain in their imaginations, and their foolish heart was darkened.

The Darwin fish symbol is clearly predicted by this verse. The fish symbol, taken from Christianity, confirms that they know who God is. But they hate the idea of God. They are not thankful for, but curse the idea that this is God’s universe, not their own. Their imagination has lead them to believe that organisms over time really could change into all the life that we see and that molecules really can spontaneously combine to be able to create and store information.

4. Professing themselves to be wise, they became fools.

The Darwin fish is a profession of wisdom, it says, “We, the wise, understand there is no God. Life happens without intelligence, Darwin has proved it.” Darwinists and those who philosophically stand with them considered themselves to be the wisest and most intelligent beings in the entire universe; that they know of at least. Just name an organism or alien race that is more intelligent than human beings.  The Bible says however that “The fool has said in his heart, there is no God.”  For the Darwinist morality becomes subjective and personal. They can and do define evil however they choose because they have no standard that does not ultimately go back to personal choice. Love, hate, peace, joy and understanding are all just chemical reactions in the brain, defined by random sequences of DNA.  They believe this without knowledge of how it works or verification yet call those who disagree ignorant.  They profess themselves to be “bright” but they are inwardly utterly devoid of the understanding they claim to possess.

God can be known. Many Christians agree with Paul who said, “for I know whom I have believed, and am persuaded that he is able to keep that which I have committed unto him against that day.” 2 Timothy 1:12.

5. And changed the glory of the uncorruptible God into an image made like to corruptible man, and to birds, and four-footed beasts, and creeping things.

The Darwin fish takes the name of God and replaces it with the name of a man. Earth worship, radical environmentalism and animal rights all have their roots in a rejection of God’s Word and find a home in Darwinian philosophy. They have put the creation in place of the creator, exactly as the Bible says they would. 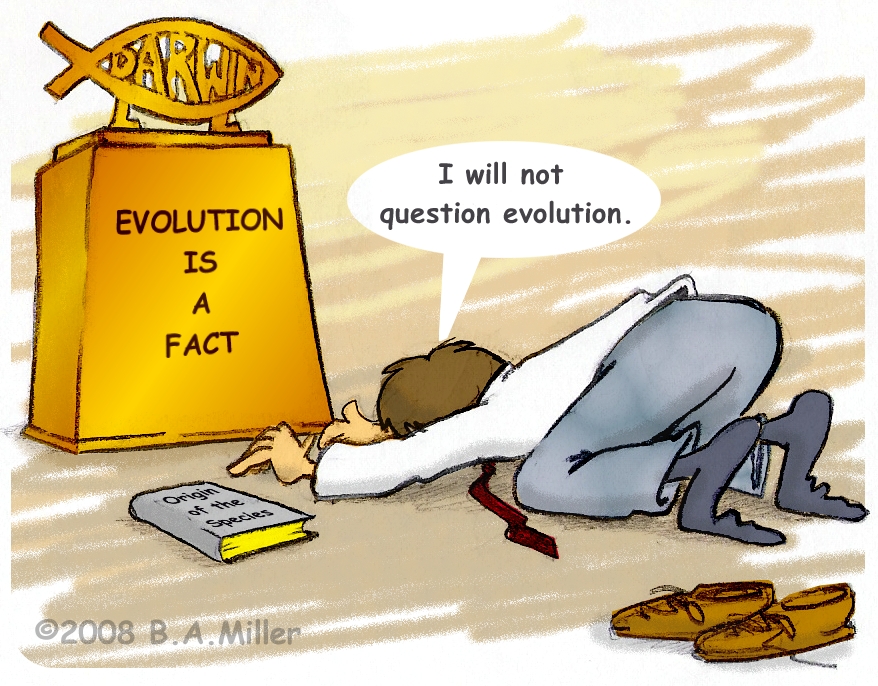 The Darwin fish is just another sign of the times we live in.

Yet it is proof not only for intelligent design,

but also of the foolishness of evolution and those who have chosen to believe in it.

For no matter which side you’re on, God knows you. Seek the real Creator.