THE FLAWED EYE: A TRIUMPH OF DESIGN

The argument from bad design, unnecessary design or unlikely design, i.e. “a designer wouldn’t do it that way” is very often used to prop up natural selection or homology arguments because they are scientifically weak. It is mostly used as a straw man argument against design.

A good example of how this tool is used was in the article “EVOLUTION OF THE EYE,” by Trevor Lamb, Scientific American July 2011. He used this device extensively and even based his conclusion on the metaphysical argument from poor design of the eye, rather than a recap of the evolutionary storyline.

“…the eye, far from being a perfectly engineered piece of machinery, exhibits a number of major flaws –these flaws are the scars of evolution.” pg 66. Emphasis added.

He only mentions three however, the blood vessels in front of the retina, the backwards retina, and the blind spot. If I were to assume that he presented the best examples of the flaws, then the other problems (after we examine his arguments) are inconsequential.

“These defects are by no means inevitable features of a camera eye because octopuses and squid independently evolved camera-style eyes that do not suffer these deficiencies.” pg.69. Emphasis added.

He is using his belief in evolution as a proof for evolution by stating that the octopus and squid eyes evolved independently. Additionally, octopus style eyes have never been tested in vertebrates. As we will see, the features he claims are defects and deficiencies don’t degrade our vision at all. Also the idea that inevitability must apply to all design features is simply assumed on his part.  Another point is that he recognizes that the process of evolution causes defects and deficiencies, but fails to recognize that this is the only thing it has ever been observed doing.

He claims that the eye’s shortcomings are absurd.

“Considering the vertebrate eye in an evolutionary framework reveals these seemingly absurd shortcomings as consequences of an ancient sequence of steps, each of which provided benefit to our long ago vertebrate ancestors even before they could see.” Pg. 69 Emphasis added.

When someone declares something absurd it could be because they don’t fully understand it. It’s not that he doesn’t understand the eye, but that he doesn’t understand macro-evolution and blindly accepts its non-scientific arguments. In his article he only addressed one part of the development of the retina. He also starts with a fully formed eye then proceeds to prove his “evolutionary story” using a degraded, disabled or deformed eye. His steps are out of order, which may explain why he sees absurdity in the actual design. He does not address the problem of how multiple coordinated information bearing mutations would create the sequence of needed evolutionary steps. Those are assumed. It’s true that evolution would have to proceed through a series of steps, but that is not evidence that the necessary steps did or will occur.

He claims that the eye has inelegant features.

“For all the ingenious features evolution built into the vertebrate eye, there are a number of decidedly inelegant traits.” pg 69 emphasis added

Not only does he personify evolution giving it the trait of being ingenious in its design of the eye, he also says that some parts of the eyes design are “decidedly inelegant.” Presumably God would not create designs with the absurd, clumsy or awkward features that any biologist could improve on if they only had the funding. So nature must have done it.

“Indeed, if engineers were to build an eye with the flaws of our own, they would probably be fired.”

Hmmm, scientists are still having trouble getting proteins to fold correctly, and he’s making the claim that they could design a better eye. But in actuality if an engineer were capable of designing even a light sensitive spot from genetic material they would probably win the Nobel Prize.

Let’s look at the “flaws” that are claimed to be in the vertebrate eye design.
The advantage we all have in examining this claim is we all have vertebrate eyes. After reading this you may wonder what kind of eyes evolutionists must have.

“…the retina is inside out, so light has to pass through the whole thickness of the retina –through the intervening nerve fibers and cell bodies that scatter the light and degrade the image quality –before reaching the light-sensitive photoreceptors.” pg 69. 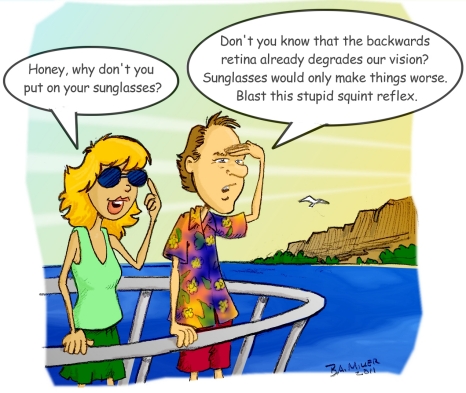 This is not a new argument. It’s a classic argument for the flawed design of the eye and has been used for many years.

If the image quality is degraded as he claims, then ask yourself what it would be like if the image captured by your retina wasn’t degraded. Wouldn’t it be fabulous? We could see millions of colors and our vision would capture images from bright sunlight and near total darkness. But, unfortunately with our degraded vision, we can only see millions of colors and our vision is restricted to seeing in bright sunlight to near total darkness. If we only had vision like an octopus.

How much image degradation is actually occurring? What is he using as a standard? What is the definition of a full resolution image? The high quality resolution that we should be seeing is never mentioned, no comparisons are given to contrast our present visual quality with full resolution vision.

Think about it. What would it be like on a sunny day if we could see more light? Or how little light would our eyes need to detect before we might as well be blind? A certain level of light is needed for anything to be seen anyway. Plus, the image quality is determined by a number of other factors as well; the lens, the iris and the imaging software in our visual cortex to name a few.

But here is the eye opener, the amazing part that he seems to miss. The fact that light can pass through the “whole thickness of the retina –through the intervening nerve fibers and cell bodies” and give us the great resolution we see is actually a triumph of design engineering. If a human designer has a better working and tested design, bring it on.

BLOOD VESSELS IN FRONT OF THE RETINA.

Now let’s ask some questions. How much trouble do these shadows cause you? If you’re eyes are working the way they were designed they don’t cause any trouble at all. This means there is more engineering design to uncover. There are several scientific design questions we should ask.

The fact is that the blood vessels supply needed nutrients to the cells, so if they need to be there a designer would compensate for this and devise ways to filter out the shadows. It is correct that the shadows are undesirable and that’s why they have been intelligently designed out of your vision. There are several amazing design features that compensate for the undesirable shadows. The eye makes continual slight movements which in essence take multiple samples of the visual field. The signals begin to be processed as they move down the optic nerve, where, in the brain, using its image reconstruction anti-shake software, a steady full resolution picture is reconstructed minus the undesirable shadows and shaking. All this happens in a fraction of a second and doesn’t cause overheating of the processors. Amazing engineering!

Finally there is the problem of a real example of the properly designed eye, the one without the blood vessels in front of the retina that has been tested and proven in vertebrates to exceed our vision. Evolutionists may claim that the eye is flawed, but eye technology is still too advanced for them to build a better design themselves, especially when they are trying to fix a problem that is already solved. This is of course a no win situation for the evolutionist because if science ever does discover a way to write unique working genetic code that unfolds from the reproductive cells through multiple stages to adulthood and coordinate with other biological systems it will only prove that intelligence is required.

“The retina has a blind spot where the nerve fibers that run across its surface congregate before tunneling out through the retina to emerge behind it as the optic nerve.” Pg.69 emphasis added.

Again, the emotional language, using active verbs to describe the static position of the nerves.

First, find your blind spot. If it really is a problem as is claimed it’s something you should automatically be able to find because it should always interfere with your vision. But, chances are you won’t find your blind spot without doing a special exercise.

Here is a link to a web page that will help you locate it. 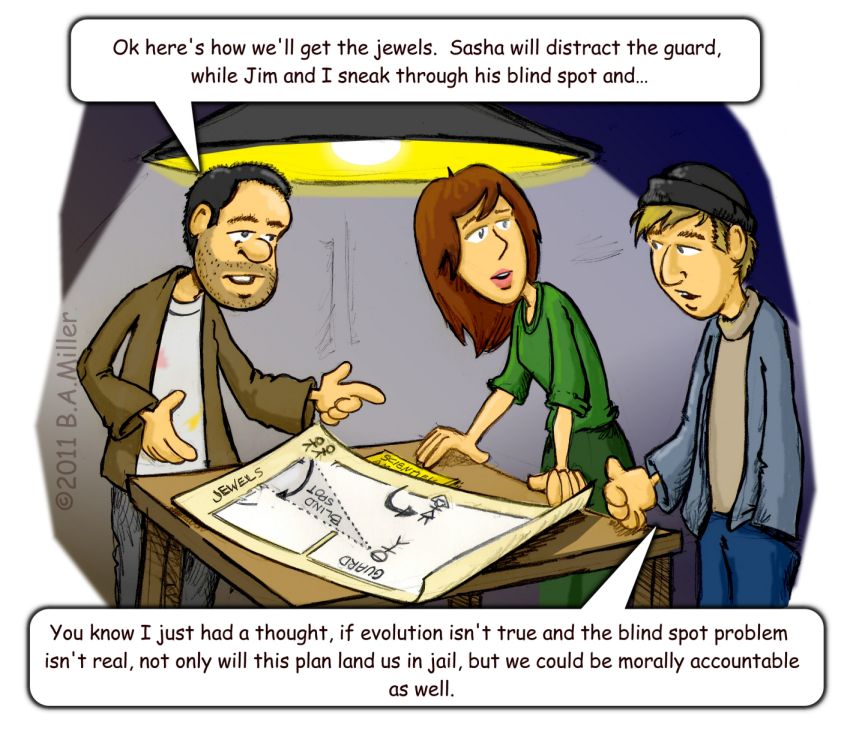 Why do you have to work at finding your blind spot? Shouldn’t it be obvious if it’s a major design flaw? Why doesn’t the blind spot impact normal vision? There are several reasons. One, if you have two working eyes, each eye see’s what the other eyes blind spot cannot. Two, the blind spot is not in your focal area, but in your peripheral vision. Three, the image processing software in your brain fills in the missing data for the area the blind spot covers. So if one eye is closed or blocked you don’t see an obvious dot where the blind spot is, but the image is filled in with information from the surrounding area. So even if you have one eye you won’t notice the blind spot.

Having a blind spot that doesn’t result in a blind spot is another triumph of design engineering. The real blind spot is the evolutionist’s inability to see that their list of flaws is entirely subjective, metaphysical and faith based. It fails to answer the question of how multiple, coordinated, information bearing mutations that create organs that unfold from a single cell to adulthood and coordinate with multiple systems for a purpose could arise without intelligent design.

Thou art worthy, O Lord, to receive glory and honour and power: for thou hast created all things, and for thy pleasure they are and were created.