WHEN THE SCHOLAR’S DON’T AGREE 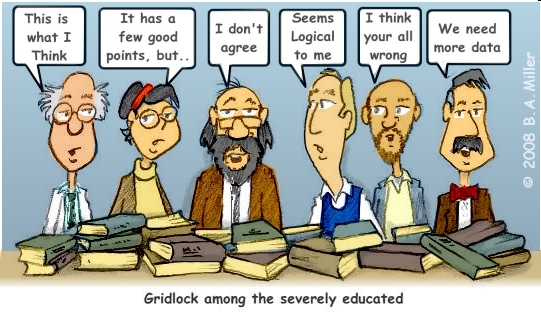 How do you know what you know? Most of us have specialized knowledge in one or two areas, our profession and our hobbies, learned from education and or experience. Some professions like an historian or a theoretical physicist or paleontologist don’t get their information from first hand knowledge, but very often from someone else’s work, or from ideas that can only be “proven” by an agreement among peers.

When an ancient historical document is studied there is no guarantee that it is authentic, or that it contains all the details we want to see. In science, when a scientist weaves a tale about the distant past it is only an “educated” guess, and there is no real way to confirm that it is true. When a physicist tells you about something that they can’t see or detect in any way, but it has to be there because without it their theory won’t work, you have to trust that they know what their talking about and that things really do add up. But what if there are historians who disagree, or scientists who say the story is wrong, or that the hypothetical stuff doesn’t really exist?

If both sides are claiming the other side is wrong or in some cases ignorant, who are you supposed to trust? How do you get two very opposite positions from looking at the same data? That generally occurs when some of the scholars have presuppositions and biases from which they base their investigation. The best we can do is listen to the evidence from both sides and make a decision. Of course the world view that we have when we start the investigation will have a great impact on which ones we will accept and which ones we will reject.

There are a few things that should be asked.

In the end all of us have to decide for ourselves. Trusting in someone else to decide what’s true for you just doesn’t cut it. Those who know God however have a tactical advantage in the search for what is true. The Holy Spirit.

John 16:13
Howbeit when he, the Spirit of truth, is come, he will guide you into all truth: for he shall not speak of himself; but whatsoever he shall hear, that shall he speak: and he will show you things to come.

If you have doubts, or questions or concerns, present them to God. Or you can try to do it on your own.