ITS TURTLES ALL THE WAY DOWN

There is a story that goes something like this,

After a lecture on the cosmos, an old woman approached the lecturer and said, “I’m sorry but your wrong about the earth orbiting the sun and the sun being part of a galaxy, the earth is actually sitting on the back of a giant turtle”
The lecturer then asked, “Well, what’s the turtle standing on”
“Another turtle.” She said.
“And what’s that turtle standing on”
“It’s quite obvious,” she said, “its turtles, all the way down.”

Ever since Michael Behe first introduced the idea of irreducible complexity, evolutionists have tried to explain it away. The basic idea is that if a system made up of several parts ceases to function when any of those parts is removed this shows that all of the parts must have been present at the beginning. So how does a system that is irreducibly complex come about by gradual changes over time? It is very unlikely. This then is an indication that intelligence must be involved. It is also a falsification of Darwinian evolution, for Darwin said that if could be demonstrated that any complex system could not have arisen by small gradual changes his theory would fail. Well, in addition to the many organs and systems in biology, molecular biology has shown this to be the case.

Behe used an example of a mousetrap to demonstrate irreducible complexity on a level we should all be able to understand. But the real evidence from specified irreducible complexity is in molecular biology. Life is overflowing with irreducibly complex, information rich, interdependent systems from the molecular level to the ecological level. So how do evolutionists deal with this? Quite often it seems that they just ignore it, it’s not an issue, evolution is a fact, next topic. The next thing they do is design reducibly complex systems to show you that reducibly complex systems can exist. Then they attempt to show how a system can become irreducibly complex through gradual changes. These all suffer from some logical deficiencies.

How does designing a reducibly complex system show that irreducible complexity is not a challenge to evolution? 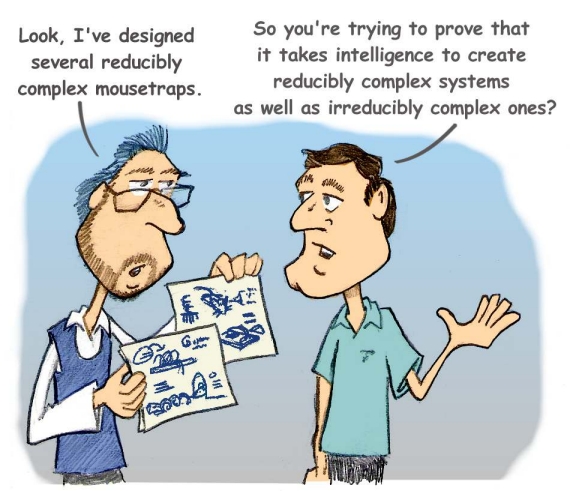 Several evolutionists have attempted to demonstrate the “error” of irreducible complexity by designing simpler mousetraps. They designed reducibly complex mousetraps, they showed the evolution of mousetraps, but what they didn’t do is show how the mousetrap Behe presented could still work if you remove any of the parts. How does using intelligence to redesign a mousetrap demonstrate that no intelligence was needed? …That’s a rhetorical question.

The similarity between life and a mousetrap is not just the mechanics, but the instructions. Those who redesigned the mousetraps intelligently altered the instructions. They then used the materials, dimensions and construction indicated by those instructions to construct their mousetraps. Many of their designs don’t look like they had been built or tested, but that is usually the case with evolutionary stories. Life however doesn’t have the luxury of altering the blueprint to fit a need or solve a problem. In fact life is designed to insure that the instructions don’t get altered.

So the question is, if the operation of the mechanism is based on a code, and the code according to evolution is an accident, how could the code get altered to gradually create the irreducibly complex mechanism? The parts don’t magically appear and fall into place; they are built according to a code. That means in a system with more than one part the code to build all those parts had to be written at the same time or you get nothing. This doesn’t happen without intelligent direction.

Natural selection is not a help here because it doesn’t select the code. It doesn’t even select the mechanisms within the cell, it selects the whole organism. So until a code actually builds a working mechanism it is as if it wasn’t there. In evolutionary terms an incomplete code would not be a factor. The code wouldn’t be a factor for selection until it did something. Only when the code built the entire irreducibly complex system would it even make an impact. And that is what could not happen gradually. Only intelligence is capable of programming the code so all the parts work in unison. Life has been designed by intelligence.

But wait, there is a way that an irreducibly complex system could arise by gradual changes to the code. Yes there is. And it’s actually rather simple. First, you start with a system that is reducibly complex, one that already performs a useful function. That system was just there, Ok. Now, you add a component that either has no impact, or enhances its function. That component just happened to be available. So far so good. Next another part of the initial system fails and it just happens that the new component can take over that function. But for some reason the new component becomes critical to the systems function. Presto, you have an irreducibly complex system that arose by gradual steps. It’s so simple. How could the intelligent design advocates have missed it?

The problems with that scenario is that it conveniently starts with a reducibly complex system that is assumed to have arisen through gradual processes. It assumes that the other parts and failures occur in the right order and the function is automatically the result. It ignores the fact that the code has to be altered. 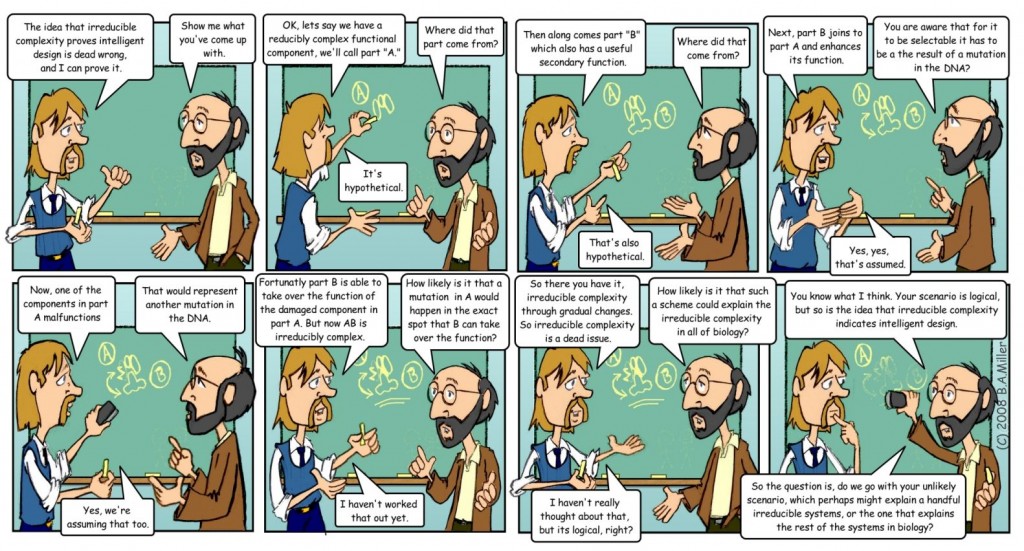 Evolutionists are answering irreducible complexity problems with what they call “secondary functions.” They know the primary function, and sometimes they can find secondary functions for the components. They claim that this solves the problem; as if having all the parts of the mousetrap being used for various things around the kitchen means that there is no problem with a mousetrap being made from those parts without a designer. The problem is again, the blueprint. Having some or all of the available components doesn’t explain how they got coded into a different process. And claiming that they functioned in an unknown secondary function is akin to claiming “turtles all the way down”.

Secondary systems don’t solve the problem of irreducible complexity, since they quickly become dependent on hypothetical changes and are not provable. They just avoid the problem. The idea that secondary systems could explain the rise of all irreducibly complex systems in biology is not plausible. The fact that irreducible complexity exists in life cannot be explained by natural processes. Its not turtles all the way down, life was intelligently designed.