“Why should a rat run, a bat fly and a porpoise swim, and I type this essay with the structures built of the same bones unless we all inherited them from a common ancestor. An engineer starting from scratch could design a better limb in each case.”

One of the arguments that evolutionists often put forth is that there are many poorly designed systems in life. This, they claim is evidence of evolution. Why?  If God was the designer the design would have been better. So the logical conclusion is that it must have evolved. Not only that, but often they will present an alternate design or at least imply that someone else could easily re-design whatever system or structure they are complaining about. This is a very poor argument. It hinges on how they perceive God rather than the capabilities of nature. This makes the argument metaphysical. The fact that it seems to reoccur within evolutionary literature is a testament to the weakness of their scientific arguments for evolution.

Are we the ones that determine the standards of perfection? What makes a design better or worse? “Better” relative to what? Who decides what level of functionality is acceptable? What man made designs and plans for life have prototypes or have been tested and put in to use?  Has anyone designed an organ or feature that can unfold from a single cell to an adult form?

Does augmenting life to fit our desires imply intelligent design or evolution? Do evolutionists know what a designer would design if a designer designed life?

They claim that life does not fit their preconception about what a creator would create. They therefore claim to conclude life must not have a designer. In reality they already believe life does not have an intelligent designer and are looking for ways to get away from the very obvious conclusion that it does.

Let’s take this point by point

1. Is it true that if God created it, it would have been different?

The argument from bad design is based on how evolutionists define the character of God. They think; obviously, God would not have used DNA. He would have come up with alternate molecules capable of handling genetic codes as needed. Therefore DNA was not designed. Obviously, God would not have used similar structures. He would have invented entirely new ones for each creature. So the fact that a bat flies with exquisite precision, a porpoise can live and navigate in water and we can translate thoughts in our heads to motions in our fingers and hit the right keys on the keyboard with a similar arrangement of bones is evidence that God would not have done it. The idea that similarity automatically means evolutionary relationship is a major blind spot in evolutionary thinking. There is no reason to assume that a creator would not use similar designs in different organisms.

2. Even bad designs require a designer.

Whether something has to be the product of intelligence has nothing to do with whether the design is good or bad.  Both good and bad designs can have a designer. Many bad designs have come from very intelligent people. In fact many bad designs have been very successful, simply because nothing else is available.  So finding a system in life that seems poorly designed is not evidence of evolution.

3. Apart from a designer perfection is arbitrary. 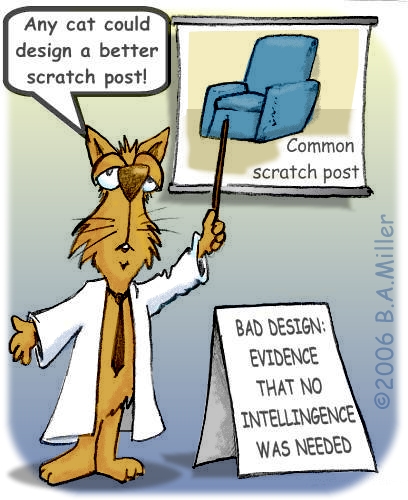 Because evolutionists believe there is no designer, they tend to believe that their word on the quality of the design is final. But perfection is based on the standard set by the designer or designers.  We should know from our own experience with human designs, that even a bad design requires intelligence. Yet evolutionists maintain that the “bad” design of living systems is evidence against intelligent design.  They look at the designs of living systems and find something they claim is flawed. Most often the reason they see a flaw is because they don’t fully understand what it is they are examining. For instance there once was a long list of vestigial organs and structures. That is, organs and structures that had no known function and were assumed to be useless remnants of our evolutionary ancestry. One by one these organs have been eliminated from the list as we learn more about life. The list is actually a measure of the ignorance of the evolutionists that compiled it rather than evidence for evolution. There are also many reasons why a good design may appear “bad.” A good design can be misused, misunderstood, or a good design can appear bad simply because it’s not what we wanted. That is, our reasons for seeing something as bad can be purely subjective.

4. There are no engineers, biologists or any other scientists that can design life.

The quote above saying that “an engineer starting from scratch could design a better limb in each case” is just plain stupid.  No engineer has yet to design any living system from the molecules up. No molecular biologist has designed any biological system without starting with life or the ideas gleaned from what they know of life. What evolutionists do is they find things in life that they don’t like or wish would do something else, then draw pictures of their ideas and say they re-designed it. Drawing pictures or creating computer programs of what you think life should be like is not the same as actually designing something and putting it to the test. When those who claim the eye is designed backwards can create a “proper” eye and have it work in a real person, well, then it will prove you need intelligence to create anything as complex as an eye. And it still won’t prove the original eye, which is sensitive to a single photon of light, is flawed.

In real science, the reverse actually happens. Biologists look at life to learn. They look at life to see if they can improve or create man made systems. This is called biomimicry, and it is based on the fact that life is brilliantly designed.

5. We live in a fallen world

On the sixth day God declared that the creation was “very good.” The world is obviously not very good, and the Bible declares this.

“For we know that the whole creation groaneth and travaileth in pain together until now.”
Romans 8:22

This world has changed dramatically since its creation. The world that was very good no longer exists. Life is now in a state of imperfection. Yet even in this state, it still exhibits the harmony, imagination, wisdom and ineluctable genius of the creator.*
*(Note, the words harmony, imagination, wisdom and ineluctable genius are the exact words an evolutionist used to describe the blind chance mutations of 3.8 billion years of evolution. Talk about blind.)

6. Precision is not an accident

Imagine a horse running across uneven terrain without a pause, weaving in and out among the other horses in the heard, seemingly effortlessly. Imagine a man made six legged robot slowly inching its way ungracefully across the same terrain. Inside the horse neurons are firing billions of times a second, smoothly coordinating the horse’s graceful stride, powered by natural non-polluting energy converted by its digestive system from plants in the surrounding environment. The robots clumsy movements, powered by toxic chemicals, being guided by a skillfully written man made program or a man with a remote standing behind the bushes. The horse can react swiftly to changing conditions, to other horses, to men, birds, rain or snow, hills or slopes. The robot has no consciousness of anything. It could be in a lab, in a field or in a trash can and it would not know the difference. The horse stops to rest when it is tired, feed when it needs energy. The robot just stops.

It’s not just the horse that we can look at, it is every living organism on the planet. From the molecules up, life operates with astonishing precision.  An intelligently designed robot by comparison almost seems like a piece of junk. Yet robots represent hundreds of thousands of mind hours. Hours spent by people, thinking, designing, creating, utilizing their intelligence. The idea that life was intelligently designed was dismissed by many scientists over a hundred years before we understood what was really going on, before we realized how a signal from the brain could travel to a specific muscle and contract it in unison with muscles all over the body.  Intelligent design was rejected a hundred years before it was understood that proteins must be precise and are constructed by going through many stages of production and quality control.

Is life really so poorly designed that it had to have evolved?  King David, who incidentally was not a scientist, discovered something that modern science (were it not stifled by the materialist paradigm) should have shown all of us some time ago.

I will praise thee; for I am fearfully and wonderfully made: marvelous are thy works; and that my soul knoweth right well.

This page was brought to you by Accidental Precision Corporation.