LAMARKISM IN THE SMITHSONIAN or FIRE CAUSES BIRTH DEFECTS IN HUMANS

In the article “SPARK OF GENIUS” in the December 2012 issue of Smithsonian, evolutionists claim that fire influenced our biological evolution.
“…fire’s most lasting impact was how our responses to it altered our brains, helping endow us with capabilities such as long term memory and problem solving.”

They suggest that:
Using fire as a light led to a “profound change in how our brains regulate time.” This is because it allowed us to stay awake longer.

And,
“…fire altered the quality of sleep.” Apparently, fire kept predators from disturbing our sleep thereby producing a more productive REM sleep. That’s provided that the other cavemen weren’t up all night talking around the campfire. But then if the ones that wanted to sleep went off where it was quiet doesn’t that negate the protection of a fire. Just theorizing.
This would also be similar to connecting softer mattresses and pillows to the renaissance.

They also tell us that:
“Fire might also have improved our ability to think about many things at once and relate them to one another.” Staring at fire enhanced our ability to meditate (focusing on one thing) helping us to think about many things. They say that fire provided a focus for meditation helping us regulate our attention and come up with contingency plans. Like how to solve the problem of noisy cavemen vs predators.
Can staring at a flame still cause genetic enhancements? There may be a research grant in someone’s future. 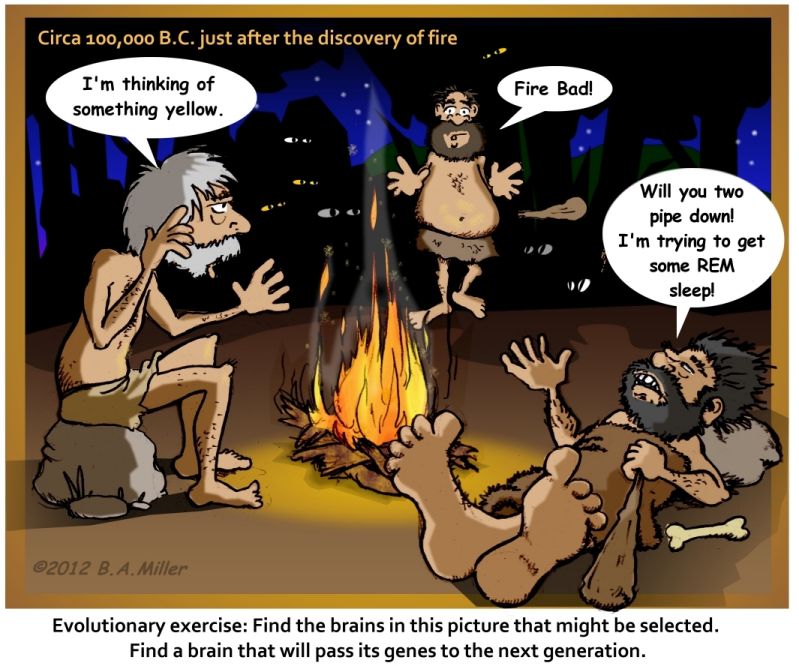 Biologically, in order for a response to fire to do anything to our brains they would have had to somehow affect our genes. But we know that nothing that affects the working of the brain in a caveman’s lifetime would in turn cause changes to the genes that create and regulate the brains of his kids. The idea that fire aided in improving mental abilities in the ways described is Lamarckian. Lamarck, a 19th century evolutionist, believed that organisms evolve by inheriting traits developed during their parent’s lifetime. This was easily disproved and has been known to be false for close to 200 years. But it’s still showing up today in the Smithsonian.

How did they test these hypotheses empirically? They haven’t yet. What they did is assume evolution and compared modern humans to modern apes. The differences are assumed to have evolved. That doesn’t start to explain how the changes would have or could have occurred.

They also say that evolution would have favored those that were good at meditating. What would be the quantity of favor per quantity of meditation? How much impact did meditation have on overall fitness in a population of early Humans? They suggest that the Neanderthals couldn’t compete because of these factors. Can you imagine a meditating Neanderthal? Well there you have it. The article is another exercise in evolutionary myth making. It all makes sense, but first you must believe.