THE EVOLUTIONISTS HAVE A BRIDGE TO SELL YOU

But does it seem silly to them because they miss the point or don’t understand it?

Think about what is said here:
“This is why irreducible complexity cannot tell us anything useful about how a structure did or did not evolve.” -Douglas Theobald

Regardless of the reasoning that led to this statement, irreducible complexity is not an argument about how things evolve. Its about why most things can’t evolve, and therefore supports intelligent design. So of course it can’t tell us anything useful about how a structure did or did not evolve. What it is designed to show is that the evolutionary paths are either highly unlikely or not available at all, meaning the designing agent is not evolution. But they believe if they can show an exception or two that it falsifies the entire idea.

They call the sequence they use to disprove irreducible complexity the “Mullarian two step.” because there are only two steps and a Nobel Prize winner called Muller thought of both of them. I doubt this idea is what won him the prize. They offer a second example from biology that suffers from the same problem as the “two step”. They also add some supporting documentation, but if your logic is faulty, then adding documentation to it only serves to entrench the error.

This is their simple two step process, “All you need is to 1. Add a part, 2. Make it necessary.”

They offer, as a simple proof, a three block precursor bridge they claim becomes irreducibly complex after the addition of a slab and the removal of the center block as shown below. 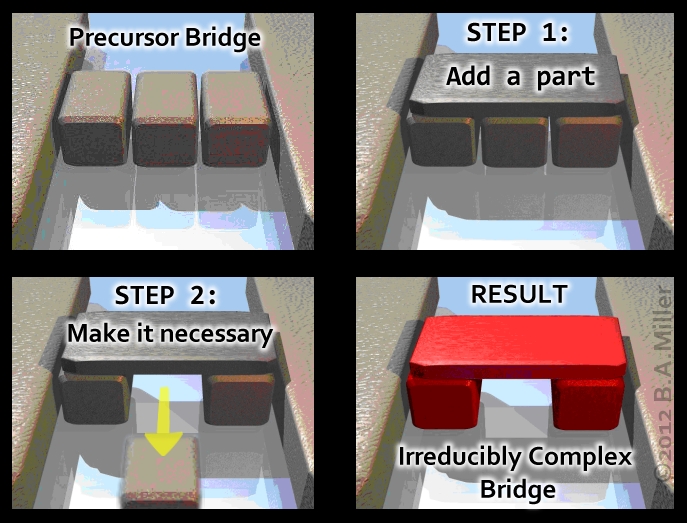 They say,
“It’s that simple. After these two steps, removing the part will kill the function, yet the system was produced directly and gradually from a simpler, functional precursor.”

They think they have debunked irreducible complexity with this simple two step process, but as we shall see, this is nothing more than sleight of hand.   Keep your eye on the necessary components. 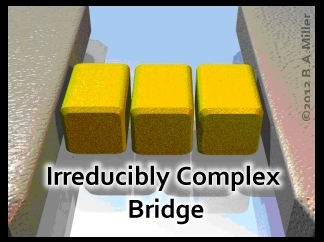 1. They claim that the precursor bridge is simpler than the end result. But take a look. The precursor bridge has 3 parts, the result also has 3 parts. The idea that the first arrangement is simpler than the result is purely subjective. When looking at biology the suggestion of simplicity often allows them to bypass many levels of complexity and leave them unexplained. Like calling a light sensitive spot when attempting to explain the evolution of they eye

2. A significant problem is that the precursor bridge in step one of their example is already irreducibly complex. Try taking away one of the blocks.  How would that get built using the Mullarian two step? If it is a bridge that connects point A to point B then even at the first step no part can be removed without destroying this function.

3.  The introduction of the slab is a required step, which introduces the question of  the likelihood of the part and its addition. In the example the new part is being added by intelligent design. How does this translate to the accidental steps (mutations) in materialistic biology?  Since the slab has to be added to the bridge. its origin is also necessary. In evolutionary biology, the slab originally would have to have appeared by accident.  But, not only is its addition necessary, but its shape and placement are also critical. In biology this represents another specific mutation or set of mutations at some point.  So Occam’s razor is starting to get dulled by this simple “two” step process.  Its always easier to have a two step process when you start it at the end of a 10 or 20 step process. They seem to assume that if a component exists its addition to another function (the placement) cannot be questioned. They are satisfied with the fact that it might have been there. 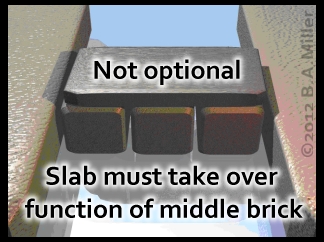 The creation of the slab is an unseen step. When they look at biology, they look for secondary function to explain what the current function could have evolved from, but very often fail to recognize that primary function must exist first. Somewhere back in the history of each structure, function must be created. And that is where the first level of irreducible complexity begins.

4. There is the need for the bridge. If nothing needs to get across the bridge, then it doesn’t matter if you reduce the complexity of it or not. Function would be irrelevant.  The bridge in their example starts out being necessary. The need is an unaccounted for step in their bridge example. So we find another unconsidered layer of complexity. In biology need drives the retention of function, but it does not explain the origin of the function or the need. 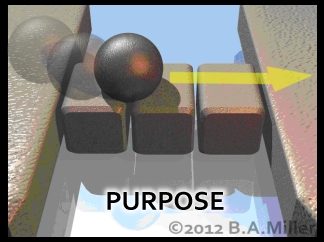 There may indeed be several structures in biology that may have evolved irreducible complexity but that is not an issue. The evolutionists believe that if they can show a few structures that could have evolved to be irreducibly complex that’s the end of the problem. But the reality is that if they could show all but one of the irreducibly complex systems and structures could be the result of evolution, it only takes one system or structure to prove that it could not.  It’s an all or nothing situation.  By keeping the focus at the level of proteins and changes in single celled systems they avoid the problem of the more complex systems of multi-cellular organisms.

It only takes one feature or system that is irreducibly complex to stop the show, such as butterfly metamorphosis. There are thousands more such examples in biology. Even if you were able to find dozens of exceptions in each organism, how many irreducibly complex would it take to prove it couldn’t evolve?  Just one.

As for the evolutionary bridge to irreducible complexity, it’s nothing more than sleight of hand.  I’m not buying it’