“In the literal sense of the word, no doubt, natural selection is a false term.” Charles Darwin 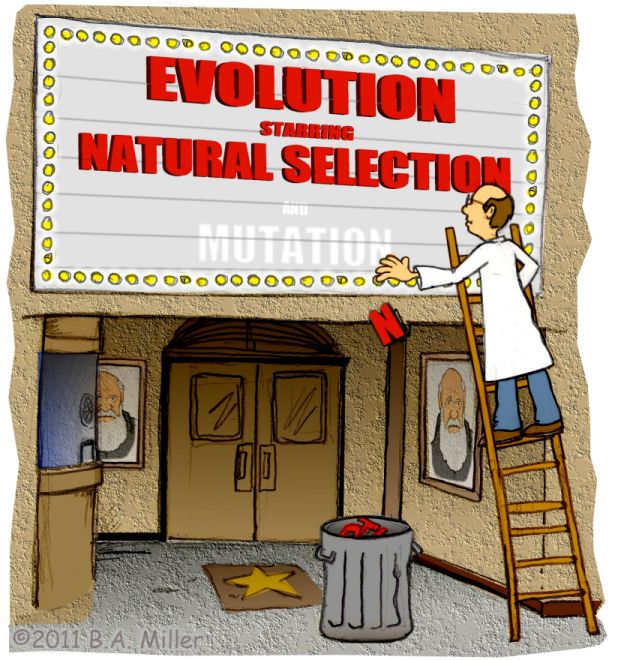 Natural selection is the star of the evolutionary process. How often is natural selection given exclusive credit for a presumed evolutionary advance in biotechnology?  Meanwhile, mutation, its silent partner with the bad reputation, the one that did all the design work, misses another opportunity for stardom.  Even Darwin was aware that natural selection wasn’t capable of causing anything without variation.  Consider the following quotes from the Origin of Species in which Darwin recognized natural selection’s actual power for change. Speaking of variations he said,

“Unless such (profitable variations) occur, natural selection can do nothing.”

“Unless favorable variations be inherited by some at least of the offspring, nothing can be effected by natural selection.”

“What applies to one animal will apply throughout all time to all animals, -that is, if they vary- for otherwise natural selection can effect nothing.”

NATURAL SELECTION DOES NOTHING!

(Without variation and mutation)

“Our ignorance of the laws of variation is profound.”

You can’t very well have a sound scientific theory without knowing how the important half of the equation works. Can you? Well, I guess you can, if you’re a genius.  And because he had a brilliant theory that worked as long as you didn’t have to account for the actual mechanism for variation he believed, by faith, that it was limitless.

“I see no reason to limit the process of modification, as now explained, to genera alone.”

“I can see no limit to the amount of change, to the beauty and complexity of the co-adaptations between all organic beings, one with another and with their physical conditions of life, which may have been effective in the long course of time through nature’s power of selection, that is by the survival of the fittest.”

Darwin didn’t see any limits because he was completely in the dark. And the darkness seemed limitless. He had become so enamored with the shear power he had assigned to natural selection that he was unable to hold to the idea that it couldn’t do anything unless variation gave it something to do. He knew it, but he couldn’t abide by it. Natural selection, he believed, had power to modify with no limits.  So, what Darwin declared in triumph was really a statement based on ignorance.

“It may metaphorically be said that natural selection is daily  and hourly scrutinizing, throughout the world, the slightest variation;  rejecting those that are bad, preserving and adding up all that are good; silently and insensibly working, whenever and wherever the opportunity offers, at the improvement of each organic being in relation to its organic and inorganic conditions of life.” “Natural selection, it should never be forgotten, can act solely through and for the advantage of each being.”

No limits to its creative power, working exclusively for the benefit of each being, the perfect replacement for a creator. No wonder it’s the star of the greatest show on earth.

“The Body plan or design of an animal results from a pattern of development programmed by the genome, itself the product of millions of years of evolution due to natural selection.” Biology Fifth Edition, 1999, Campbell Reece and Mitchell. Pg. 787 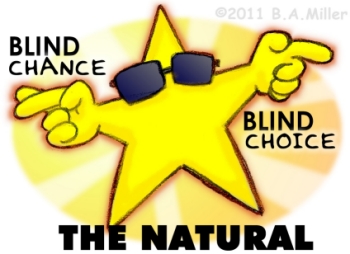 So now it’s the 21st century.  Evolutionists have had over 150 years to think about how variation and mutation create the raw material for natural selection to work on.  Have modern day biologists realized that the real challenge to evolution is still accounting for the very thing that Darwin was ignorant of, the information in the genome? Some of them have, but the majority of biologists are still stuck with the 19th century view that natural selection is the driving force of evolution.

The article “EVOLUTION OF THE EYE”, Scientific American, July 2011 by Trevor Lamb looks back to the 19th century to begin building the case for eye evolution. “…Charles Darwin himself acknowledged in On the Origin of Species –the 1859 book detailing his theory of evolution by natural selection –that it might seem absurd to think they eye formed by natural selection. He nonetheless firmly believed that the eye did form in that way, despite the lack of evidence for intermediate forms at the time.” pg.64.

Again, the reason why Darwin was able to believe that they eye could evolve was because he believed that variation was limitless. He was clueless as to its true capabilities in biology. Because of this, there was no problem with the multiple components of the eye arising by chance. He was able to weave a story that he found plausible within his understanding.  And he did indeed appeal to future discoveries in the fossil record to confirm that the variations occurred, but the lack of evidence did not deter his belief.  In any case, fossil evidence is not evidence that the variations could occur. The assumption on the part of evolutionists is that if they can find what they deem intermediate forms then it proves the variations occurred. But that still leaves the exact mechanism unexplained but assumed.

Next the article (either purposely or because the editors were ignorant) misrepresents the creationist position:

“The eyes of vertebrate animals are so complex that creationists have long argued that they could not have formed by natural selection.” Pg 66

Natural selection is the star and gets the credit and the variations and mutations are assumed and not proven in evolutionary arguments. Then, with confidence Lamb buries his straw man and states that his findings  “put the nail in the coffin of irreducible complexity and beautifully supports Darwin’s idea.” Pg 66 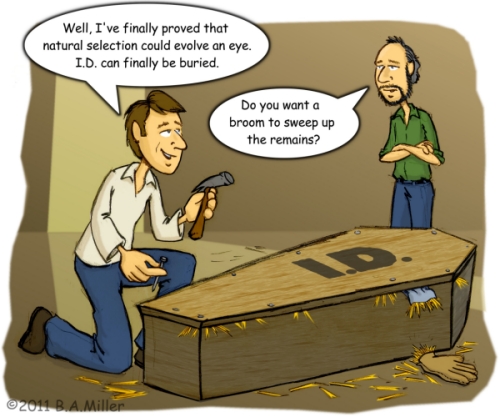 Again, Darwin’s idea hinged on ignorance of how variation could create new traits, so his focus was natural selection. But modern day evolutionists don’t have that luxury. When they look at a feature and they assume that mutations could build it they are taking a step of faith. When they ignore mutation and refer to natural selection as the cause for the design they demonstrate how problematic organism building mutations really are. So in their case it’s a self-imposed ignorance or science denial.

Whereas when Darwin presented the idea that natural selection was making thoughtful choices as a metaphor, modern day evolutionists demonstrate a difficulty making that distinction. In presentations where they attempt to give examples of evolutionary transition there is sometimes an almost giddy excitement about what nature has accomplished.

In a fascinating book called Biomimicry,(1997) Janine M. Benyus, there are several references that attribute cognition to nature.

“Nature, imaginative by necessity, has already solved the problems we are struggling to solve” pg. 4

“…people are trusting the inscrutable wisdom of natural solutions” pg. 4

“We can see more clearly than ever before, how nature works her miracles…   …When we stare this deeply into natures eyes it takes our breath away, in a good way, it bursts our bubble” pg. 6

“Despite what we would call ‘limits’ nature manages to craft materials of a complexity and functionality that we can only envy.” Pg.97 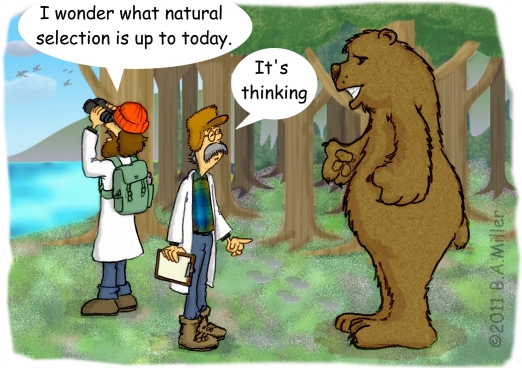 At the end of the preface of “Life on the Edge” a selection of writings from Scientific American this is said of natural selection:

“…the blind, pragmatic and wonderfully inventive nature of natural selection itself.” Pg ix

The article, EVOLUTION OF THE EYE also attributes cognitive powers to natural selection.

“Natural selection, as some might think, does not result in perfection. It tinkers with the material available to it, sometimes to odd effect.” Pg 66.

So we find that nature can craft and tinker, is pragmatic, inventive, imaginative, has wisdom, works miracles and can perceive need (necessity). A perfect replacement for an intelligent designer.

These themes can be found throughout evolutionary literature. It may represent evolutionist’s unconscious need to explain the obvious source of intelligence responsible for the designs in nature. They see the need to have something doing the thinking and natural selection is the only candidate within materialistic philosophy that can be forced to fit the bill.

Natural selection in its star role is given credit for coming up with the ideas that evolution produces. 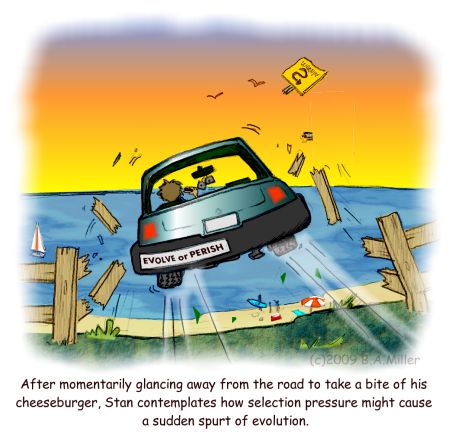 The pressure is on. Selection pressure is another metaphorical term that is misused by evolutionists. They often use it as a force that will press out new traits. Selection pressure in any real sense can only be said to eliminate all organisms that do not have the traits to cope with a new challenge. It cannot force the genetics of an organism down any specific path. What is the only factor that could force an organism along an evolutionary path? Multiple, coordinated, information bearing mutations that unfold from a single cell to an adult form.

In the article “EVOLUTION OF THE EYE” selection pressure was used as a device to coax out several features. These examples also focused on levels that natural selection cannot be said to affect.

“Compound eyes are impractical for large animals, however, because the eye size required for high-resolution vision would have been overly large. Hence, as body size increased, so, too, did the selective pressures favoring the evolution of the other type of eye: the camera variety” pg. 66 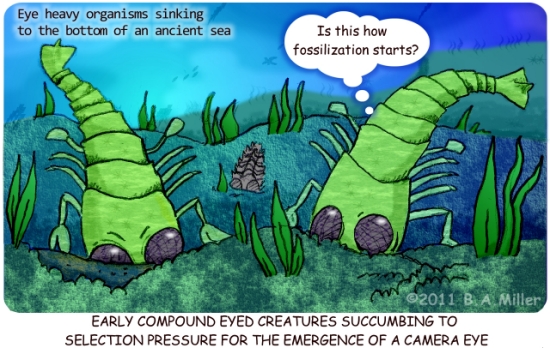 “With the advent of the lens to capture light and focus images, the eye’s information-gathering capability increased dramatically. This augmentation would have created selective pressures favoring the emergence of improved signal processing in the retina beyond what the simple connection of photoreceptors to output neurons afforded.” Pg. 69

Speculation pressure is at maximum by the end of the article. The magical appearance of the lens (a mere augmentation) with the purpose of capturing and focusing creates pressure for (the really difficult to explain) signal processing that also seems to magically appear.

“The earliest camera-style eyes no doubt faced an even more severe limitation, because they presumably had even fewer nerve fibers. Thus, there would have been considerable selection pressure for the evolution of muscles to move the eye.” pg 69 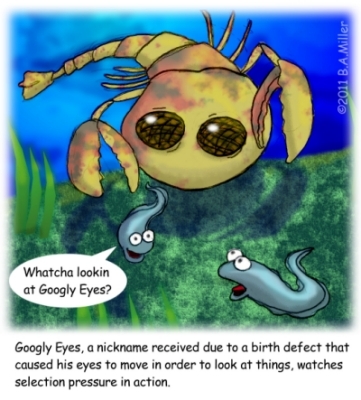 An additional problem with signal processing is that compound eyes and camera eyes see images differently and would need different systems to compile the images. What kind of selection pressures would affect the genetic material to create these systems? The fact is that evolution is assumed to be true, so the selection pressure stories are an ad hoc explanation to satisfy evolutionists. Just believe.

SOME HARD FACTS ABOUT NATURAL SELECTION

Natural selection has retained its starring role in the story of evolution for two reasons. It can be manipulated to look as if it’s taken the place of intelligent design processes and it draws the attention away from the real show stopper, mutation.