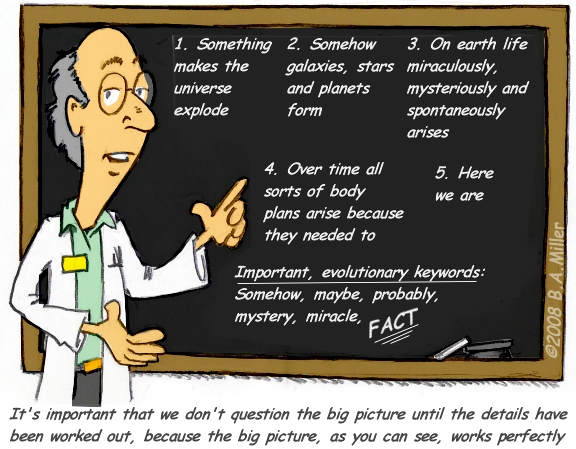 Evolutionist will shy away from the topic of the origin of life when in mixed company and attempt to claim it’s a non issue. In spite of this denial it is part of most evolutionary storylines. Evolution was never accepted because scientific data demanded it. Its appeal has always been that it eliminated the need for God and because it presents a logical framework that works well as long as you don’t find it necessary to verify the details.

Question: What was the actual date that molecules to man was proven by using the scientific method?

When evolution was first introduced and accepted, geologists believed that most rock layers were laid down over millions of years and that it took a long time for fossils to form. We now know that rock layers and many geologic processes that were once considered to form geologically slow actually form rapidly, sometimes in only a few hours. We also know that fossils form when they are rapidly buried in sediment or volcanic flows, contrary to the slow processes once thought to form fossils. Even so, the slow fossil formation scenario is the one that merits the long discussions and diagrams in evolutionary literature.

When evolution was first introduced and accepted, the science of the day had determined that the universe was infinite, static and had always existed, i.e. unlimited time and space and material for evolution to take place. We now know that the universe is finite, expanding and had a beginning.

When evolution was first introduced and accepted, spontaneous generation was a fact, variation was unlimited and cells were just simple blobs of living matter. There was no information in the cell and the laws of heredity were a mystery to all but a single person, who happened to be a Christian. Today we know that variation is limited by heredity, and that the cell is full of information and incredibly complex.

Where did Darwin and his contemporaries look for evidence of the molecules to man change needed to prove his theory? Rather than biology they looked to the rocks. The rocks contained the evidence of the assumed biological process of evolution. Surprisingly, that remains largely unchanged. Not because the rocks are the best place to study biology, but because when you look at the rocks, the biological changes can be imagined. The fact is that even today, biology denies that evolution is possible. Consider the following quotes .

96 years after evolution was first accepted

118 years after evolution was first accepted

The ‘warm little pond scenario was invented ad hoc to serve as a materialistic reductionist explanation of the origin of life. It is unsupported by any other evidence and it will remain ad hoc until such evidence is found. One must conclude that, contrary to the established current wisdom a scenario describing the genesis of life on earth by chance and natural causes which can be accepted on the basis of fact and not faith has not yet been written.” -Hubert Yockey “Journal of Theoretical Biology 1977

122 years after evolution was first accepted

In the years after Darwin, his advocates hoped to find predictable progressions. In general, these have not been found-yet the optimism has died hard, and some pure fantasy has crept into textbooks. -Raup, David M., “Evolution and the Fossil Record,” 1981

126 years after evolution was first accepted

“Even today we have no way or rigorously estimating the probability or degree of isolation of even one functional protein. It is surely a little premature to claim that random processes could have assembled mosquitoes and elephants when we still have to determine the actual probability of the discovery by chance of one single functional protein molecule.” –Michael Denton Evolution A Theory in Crisis 1985

129 years after evolution was first accepted

Considerable disagreements between scientists have arisen about detailed evolutionary steps. The problem is that the principal evolutionary processes from prebiotic molecules to progenotes have not been proven by experimentation and that the environmental conditions under which these processes occurred are not known. Moreover, we do not actually know where the genetic information of all living cells originates, how the first replicable polynucleotides (nucleic acids) evolved, or how the extremely complex structure-function relationships in modern cells came into existence. -Dose, Professor Dr. Klaus, “The Origin of Life; More Questions than Answers,” (1988)

136 years after evolution was first accepted

Even with DNA sequence data, we have no direct access to the processes of evolution, so objective reconstruction of the vanished past can be achieved only by creative imagination.” -N. Takahata  A Genetic Perspective on the Origin and History of Humans 1995

146 years after evolution was first accepted

Scientists are still looking for the basic answers, nothing has changed on any of these questions in the last 10 years. Yet evolution is still accepted, without solid science to back it up. Consider the following quote:

“During the conference (the World Summit on Evolution), I had a nightmarish thought: creationists could have a field day yanking quotes out of context while listening to a room full of evolutionary biologists argue over specific issues. In point of fact, such debates are all within evolutionary theory, not between evolutionary theory and something else. And this boundary between the known and the unknown is where science flourishes.” -Michael Shermer, Scientific American, Sept. 2005

The fact is that there is a debate between evolution and something else: creation.

The big picture, the story of macro-evolution, should not be reliable until the details are correct. Focusing on the last quote by the professionally incredulous Michael Shermer, why are we told that evolutionary biologists are only arguing over the specifics of evolution after over 150 years of scientific research? Shouldn’t reason tell us that they don’t know yet? And if they don’t know, how come they have insisted that evolution is a fact for a century and a half? Of course the debates at the conference are “within” evolutionary theory, where else would the debates be among a collection of evolutionists at a conference on evolution. But is there a debate between evolution and “something else.”

The fact of the matter is that the evolutionists do not want to allow a debate between evolutionary theory and “something else” in the laboratories, in the publications, in the classrooms, in the media, in the field or in the institutions. The goal of science is to know, to understand. The process of science may flourish when we are still trying to understand, it keeps the scientists employed, fills the conference room with debates within the theory, but it hasn’t accomplished the goal. Evolutionary science may flourish between the known and the unknown, because a search for something that doesn’t exist can use a lot of time and energy. But it seems that a fairly simple concept is being missed. Until something is known it is still unknown. Until evolutionists have reached the “scientific” goal, there is no “fact” of evolution. At least not one based on science. The reality however is that science has already reached its goal on the question of evolution. Molecules to man, did not, does not and will not happen through natural processes alone, intelligence is a prerequisite.